Home » Blog » Love is playing every game like it’s your last: Bruk Desta’s journey to recovery and his unconditional love for the game

Love is playing every game like it’s your last: Bruk Desta’s journey to recovery and his unconditional love for the game 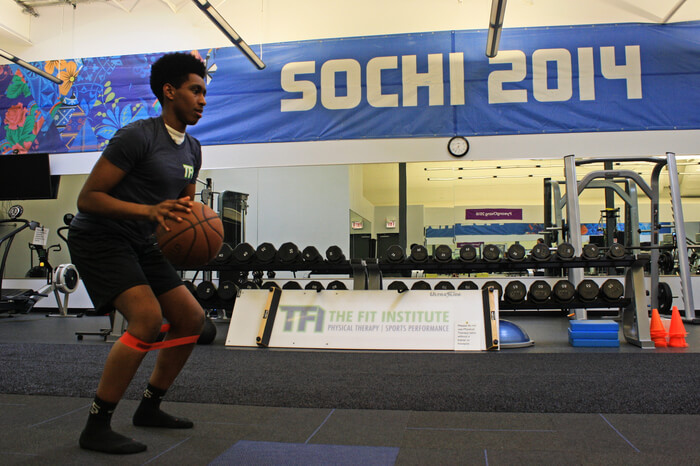 “It was pretty shocking,” Bruk Desta describes his first ACL and meniscus tear during a December 2017 high school basketball game. “I’d been through small injuries like rolling my ankle or pulling a muscle, but as soon as I tore it, I felt a pop in my knee,” Desta said. “I went down and I couldn’t get back up. It was hard for me to even lift my leg on my own. That’s when I knew, right then and there, that there was something seriously wrong with my leg.”

Desta’s coaching staff and teammates rushed over to him on the court when he told them he was done. “I knew I was going to be out for a long time with a serious injury,” Desta said.

The eight-month recovery process had a specific goal in mind: train to get back onto the basketball court and prepare for his junior year of high school and college recruitment. After a long and patient process, it seemed worth it.

Then, in August of 2018, his knee started hurting again during training. “I think I overtrained,” Desta said. The next day, he remembers feeling excruciating pain going down the stairs. “I tried to run and jog for a bit, but I couldn’t do it” because of the immense pain he was in.

He told his parents and they ventured out to the doctor. The MRI reported a torn meniscus and required surgery two weeks later. When the doctor went in for surgery, “ my meniscus was fine,” Desta said. “It was a false MRI report.” It was just that Desta’s ACL had stretched.

What kept him going? “Honestly, it was love for the game.” After being out for 13.5 months, he didn’t think he could play college basketball anymore. So he revised his goal–Desta would recover enough to play again, healthy.

“No matter how many times you get knocked down, you should get back up one more time.” He wanted to prove to himself that he could do it.

And then, on January 10, 2019, on the second game back after the 13.5-month break, Desta tore the ACL in his other leg, effectively taking him out of the game for another 11 months. The mental toll was unimaginable.

“My heart was broken because I gave so much to the game and I worked so incredibly hard to get to the spot that I was at before I went through all of these knee injuries.”

“I never thought I was going to play again,” Desta said in response to tearing his ACL in 2019. He invited his family, friends and church members to cheer him on at his third game back. The fat heads were already prepared.

Desta remembers landing in the hospital before he had a chance to play that game with the support of his loved ones, and screaming. His parents didn’t know what to do.

“I wasn’t screaming because of the pain,” Desta said. He’d been through the pain before and knew it would be tolerable. “I was upset I wouldn’t be able to play.”

His passion for the sport shines through in his words. “I never wanted to waste a minute whenever I had a basketball in my hands,” Desta said. “I was always dedicating time to putting in my all for the game.”

Today, Desta’s body feels right. He stretches and takes hot and cold showers, to relax his muscles. He’s playing again. Desta’s ACL scars decorate both of his knees, a grotesque form of art and hard evidence of the journey that has shaped him to be a better person and appreciate the little things, like handling a basketball again–healthy.